Hello guys!! A warm welcome to my blog.It’s been long time since my last blog post but I’m back now.

It was a summer holiday, I wanted to get away somewhere but didn’t know where. I was totally confused. I googled the destination to be travelled in monsoon. I came across so many names, but I pinned on Darjeeling, Kamlimpong and sikkim because I love mountains, rivers and woods .

I love to move around alone, but this time I thought  to go with my brother. My youngest brother too had vacation.  I felt he would get bored during the trip as there is huge age gaps  between us. And then, I had decided  to take one of his  friend.

So I had done a bit of research about the areas as I was taking two children along with me.I have to be extra cautious. I am a kind of person who doesn’t plan much ahead of a trip. For the very first time I had designed the itinerary carefully keeping in mind the kids’ preferences.

I rightfully believe that travel teaches the kids to take responsibility. It imbibes child  to be more tolerance and acceptance moreover it promotes incredible socialization.

I booked the flight tickets and hotels .The kids were too excited about the trip.Finally , we boarded the flight to Bagdogra from Guwahati. It landed at Bagdogra Airport after One hour. It was a short journey by flight . It was round 3 o’clock in the evening. We got a cab from airport to a Siliguri taxi stand from there I booked three Sumo tickets to Darjeeling.

It was extremely hot and humid. The high temperature was unbearable.We were drenched in sweats. The kids were hungry. We checked out  the eating place, unfortunately, didn’t find a good one. There were  small food stalls on the roadside.We resolved to  try one of the stall. It serves momo(stuffed dumpling), thukpa (soup noodles) , bhaale( puri and peas curry) and maggi .We have had momos . Trust me ,it was the delicious momos I ever had.I realised we don’t have to go to a fancy restaurant to have the best food.Even the small wayside stall could provide wonderful food.

We were waiting for the sumo to start. The Sumo does not move until and unless they fill the requisite number of passengers. Almost 4 o’clock in the evening, it started its journey and we felt relieved.

Journey to Darjeeling from Siliguri was amazing, our vehicle went on leading through a beautiful landscape. The cool gentle wind, the fluttering colourful flags ,woods across the road , the  soaring Teesta river and  the slowly hiding sun behind the mountain.I could not ask more at that moment. I simply wanted to halt the moment forever. Both the children were enjoying the stunning panoramic views.

We reached almost around 7 o’clock in the evening. It was cold and drizzling and the whole town was illuminated. It seemed like the stars were landed on the earth. We checked in at a hotel named Cornville. To our dismay, it was found  out that my luggage was exchanged with one of passenger from Delhi. He was a courteous gentleman. We have had  great a conversation on the way. It was disclosed during the conversation that he is a travel blogger. I was worried about the luggage, but thanks to the gentleman, he came to our hotel to return my luggage in that very evening as he knew where I was resting. I was so glad to see him in the hotel’s reception holding my luggage.

We were exhausted and hungry, so we took in dinner and curled inside the blanket. Following day we woke-up at 6 am in the morning, in front of the bed there was huge glass window which lead to a balcony. I spread out the curtain, I was awestruck, the view from the balcony was phenomenal. The lodge is located in the crown of a hill. The entire Darjeeling town and far off mountains were visible . It was cloudy and foggy, it felt like the whole area was encompassed by the white velvet snow. 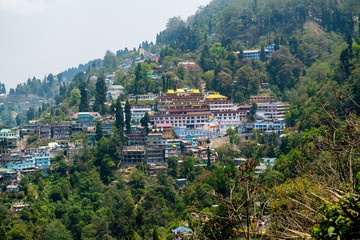 We got ready and set out to explore the place. It was cold, even though  it was summer, but the weather was rather pleasant. It was so serene and beautiful. People were still in their bed.There were no vehicle running on the road . We walked down  the steep street,finally the reached market area. Most of the shops and the restaurants were still shut. The whole area was decorated with the flags of different countries as FIFA world cup was going along. The Town and the street were looking quite colourful and vibrant.I guessed the folks of Darjeeling loved soccer.

We looked for a restaurant to have breakfast, we landed in one of the oldest and popular restaurant “Caventers ” . It was an open restaurant with patio. We stuffed our stomach with fabulous food. Nearby the restaurant there is a taxi stand from where you can hire a taxicab for a day to explore  the city. I am good at bargaining, so I utilised the skill to beat the best of fare

Before delving further into the journey let me give a brief description of our first destination” Darjeeling”.

Darjeeling “Queen of hills”is located in the eastern part of a West Bengal. It is as well known as ” Land of thunder bolt“.  It is one of the most sought after destination in the north eastern states of India.  It is renowned for its dramatic view of Mount Kanchenjunga, flabbergasting  Colonial Banglows, the rope way boast as Asia’s largest, the Darjeeling Himalayan Railway recognized by UNESCO World Heritage, the beautiful tea garden and  the awe-inspiring  landscapes. 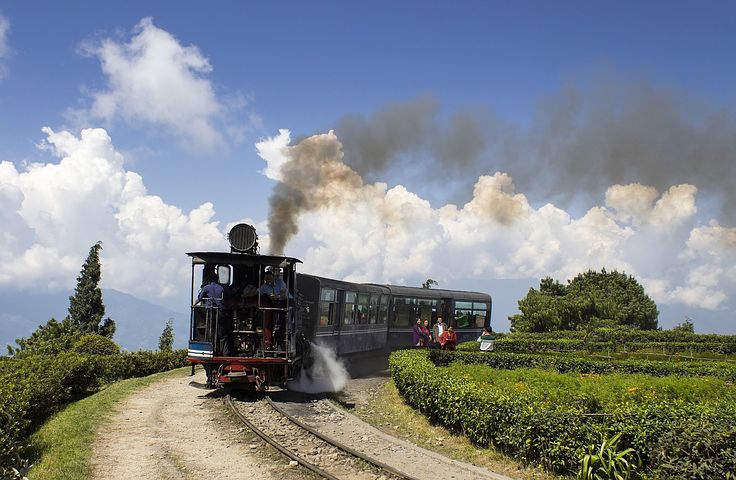 We made up to go Padmaji Naidu Himalayan Zoological Park. Kids were fascinated to visit the zoo.The zoo didn’t disappoint the youngsters. They were tickled pink to see  Himalayan Barking Deer, the Red Cute Panda, the huge Bear, the Python, the King of jungle” Lion”, Bengal Tiger,Snow Leopard .They were capivated by whole surrounding.

Within the premises of the zoo, there are Indoor Mountain Climbing Stadium and a Himalayan Mountaineering Institute . The charge per head is Rs 50 for rock climbing. The young boys climbed rocks. I was dumbstruck  to witness my brother ,6 years old boy successful in moving up the rock at the first attempt. After that we went on to explore the Himalayan Mountaineering Museum, few steps away from the indoor rock climbing  stadium. It is a huge museum, we had revealed so much about the mountain expeditions.  The Kids got to know about the various equipment use in the expedition. There is a tall statue of Tenzing Norgay -the first person to climb Mount Everest from India and a cafeteria at the adjacent of the museum.

It was an enormously enriching experience for them. They learned a lot about the wildlife.Kids discovered difficulties and obstacles faced by the mountaineers moreover the disciplined and dedication needed to go up the mountain.

We embarked on  our next destination “Rock Garden” locally known as “Barbotey Garden”. It is called The Rock Garden coz all the resting place is made by literally cutting the rocks apart from that It  hosts  amazing flora and a magificent rattling waterfall.The youngsters were enthralled by whole view. They jumped and ran all over  the place. They enjoyed every bit of it.

We proceeded  to our last destination of our day “Japanese Peace Pagoda”. There are two gates in front of the Pagoda . We entered  the first gate ,on it’s left side there is a temple called “Nipponzan Myohoji Buddhist Temple” named after its founder Fujii Guruji from Japan. We took off our shoes and went inside the temple .There was a picture of Fujii Guruji. Whole temple was lit up by the diyas and the temple was filled by the fragrance of buddhist’s incense stick. Three of us knelt down and prayed for few seconds.We had Zen like experience in the tranquil environment . I was amazed to see the kids acceptance and respect towards the other religion. Truly travel teaches the kids to be tolerance and acceptance towards the  other’s culture, tradition and religion. It’s a fact that we can’t get to know the people and their tradition unless we immersed ourselves in it.
Afterwards we entered inside the second gate which leaded to Two Storied White Building called “Japanese Peace Pagoda” built in 1972 . The architecture of the Pagoda greatly influenced by typical Japanese style. The Peace Pagoda showcases the four avatars  of a Lord  Buddha. We took a walk around the Pagoda at the circular pinnacle. The view  of Darjeeling landscape including khenchenjuga range from the top of the Pagoda was extraordinary.

It was getting  already dark,so we headed back to the hotel. The whole experience was memorable .

THE MESS OF THE WRITER

"SAPERE TUTTO DEL NULLA E NULLA DEL TUTTO." [If you're not italian, you have the possibility to translate all the articles in your own language, clicking on the option at the end of the home page of the blog]

welcome to my world